Computer Disposal Should Be Computer Recycling 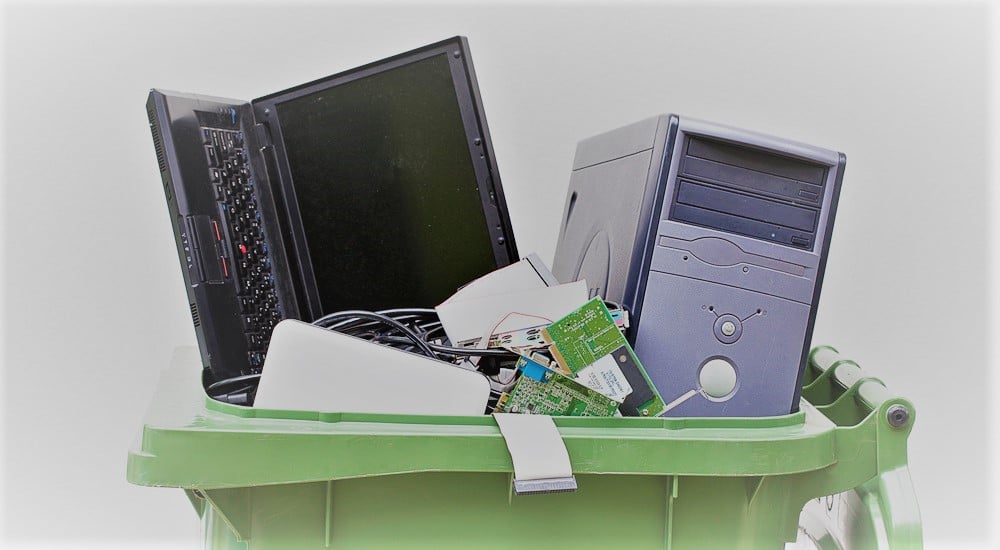 Yet, computers and monitors - and other computer hardware - can all be recycled.

Computers are essential for business - and just about everything else we do in life today. And when they stop working, get too slow, or simply don't meet our growing requirements for speed and capability, they need to be replaced.

Of course, if you have the budget, replacing them every few years or so is not a problem. In fact, with prices having dropped to relatively historic low points for most computers, monitors, and accessories, new models are usually within anyone's reach.

However, with the vast numbers of computers being replaced every year just in the United States alone, this means disposing of them has become a problem.

While it's nearly impossible to know exactly how many laptops and desktop computers are out there, we know that there were over 61 million units shipped in the U.S. just in 2020.  And when you factor in that it's estimated that the average desktop for consumers will be replaced after just six years, that means millions of "old" computers being disposed of annually.

And, according to Business News Daily,

"For most desktop PCs, you can expect a minimum three-year lifespan. However, most computers survive five to eight years, depending on the upgrading components. Maintenance is also critical, as dust is very problematic for PC components."

Another source recommends that,

"[D]ata shows that replacing your PCs by at least year 3 can significantly reduce your risk of the costs associated with keeping your computers too long."

And that's just for desktop PCs. There are also millions and millions of laptops being purchased and replaced each year, as well.

Out With the Old, In With the New

Businesses routinely upgrade their workstations with new PCs or laptops, along with new monitors, printers, and other hardware accessories. As do schools, nonprofit organizations, and city, county, state, and federal government agencies.

And all of those old units and equipment has to be disposed of somehow.

If the computer is functioning and useable, it can often be sold. However, this can also be time consuming and - for large companies - create an additional workload for them. The same PCs and laptops can often be donated, as well. And, while this is also takes time and effort, it can also be a far better option.

However, in addition to the millions of functioning and useable computers that need to be disposed of each year, there are millions of others that are either too old or simply not working.

These devices must be gotten rid of and that's often a problem.

Because less than 20 percent of all electronic devices and equipment get recycled in the United States, most e-waste ends up in landfills or is incinerated. Unfortunately, this releases materials such as lead, mercury, or cadmium into the soil, groundwater, and atmosphere, none of which is good for the environment - or people!

However, computer recycling eliminates that threat to the environment and brings benefits for other industries and the economy.

One Wikipedia entry notes that,

"Many materials used in computer hardware can be recovered by recycling for use in future production. Reuse of tin, silicon, iron, aluminium, and a variety of plastics that are present in bulk in computers or other electronics can reduce the costs of constructing new systems. Components frequently contain copper, gold, tantalum,] silver, platinum, palladium, and lead as well as other valuable materials suitable for reclamation."

Recycling e-waste helps recover important natural resources, like silver and gold, for reuse and is an environmentally friendly solution to finding these metals in existing products.

Not only is it advantageous to pursue computer recycling as opposed to simply disposing of them, which isn't legal in some places in the U.S., but it's something you don't have to do yourself. Simply give Junk King a call and our expert computer and e-waste removal team will handle all of the removal and hauling of your old computers and other e-waste.

"Properly recycling your e-waste can help protect your privacy as well. Using standard methods to delete your personal information from an electronic device probably wouldn't do the trick if it fell into the wrong, techno-savvy hands."

Junk King provides the most efficient, safe and eco-friendly computer and other e-waste removal.

Whether you only have a few workstations to clear out, or whole offices of equipment that need to be removed, we've got your covered. So, you won't need to worry about the loading up or disposing of those old electronic waste items.

Not only that, but we make sure that your old computers and other electronics end up in the right place: whether that's nonprofit for those electronics that are still functioning, or at a recycling facility to ensure your e-waste is disposed of in an eco-friendly way.

Ready to remove those old computers and electronics? It’s as simple as 1, 2, 3.
Just make an appointment by booking online above or by calling 1.888.888.JUNK (5865).
Our professional and insured e-waste removal team will show up on time at your home or office, and we'll 15 to 30 minutes before we arrive. Once we're on-site and we’ll give you a free quote based on how much room your junk takes up in our truck.
You just point and we haul those items into our junk removal trucks, with no hidden fees.