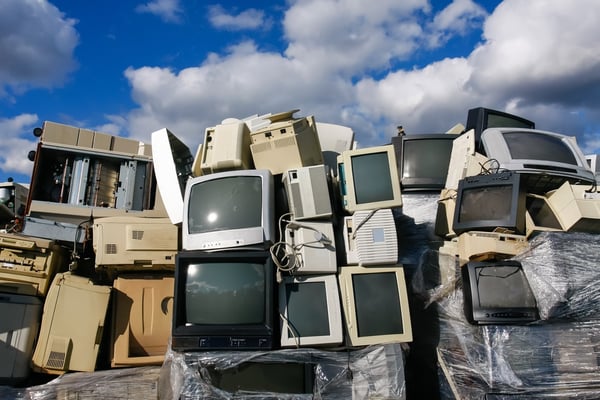 [Editors note: This post was originally published in August 2016 and has been completely revamped and updated for accuracy and comprehensiveness.]

E-Waste, or electronic waste, eventually shows up everywhere in our homes and offices.

One of the by-products of living in a country that is so materially wealthy is the vast amount of junk, garbage and waste that is produced. When you consider that sheer volume of durable goods this country produces, imports and buys it is mind boggling.

The United States contains less that five percent of the world's population, but we hold a wildly disproportionate amount of the world's wealth. And, along with that wealth, we possess an overabundance of material goods.

Drowning In Stuff: From Clothes to Electronics

An article in Intellectual Takeout featured a number of statistics that helps illustrate the reality of how much Americans own:

Another example: In 2014, Americans generated almost 50 pounds of e-waste per person for the year.

So what do we do with all that e-waste? There are essentially three options:

If we keep it, we start accumulating piles of out dated TVs, phones, printers and computers that take up valuable space in our homes or offices. Fortunately, for most people, it is illegal for us to simply "toss it" but even if it's not against the state law, it's never a good option. Unfortunately, not enough people consider the recycling option.

In fact, of an estimated 50 million tons of e-waste ends up in the waste stream every year less than 20 percent of that pile is recycled.

Over half the states in the U.S. now have some type of e-waste recycling legislation in place. In a few states, such as California, many items such as monitors, TVs, and even cell phones cannot be simply tossed in the trash.

In fact, in many places if you do choose to properly dispose of a computer monitor or old TV, especially an old CRT unit, the process takes time, effort and money.

Proper recycling is far preferable to dumping in landfills because of the toxic nature of e-waste. In fact, even though e-waste only makes up about two percent of the municipal waste stream in America, it is among the most toxic waste component.

Personal electronics, TVs and office equipment are perfectly safe in the home or office, but if they are broken apart or left in the elements to and rust all a variety of toxic materials can seep out. Among other things this can include lead, mercury, arsenic, cadmium, chromium and barium.

Recycling E-Waste As A Preferred Option

Aside from protecting the environment, having an effective e-waste recycling program in place helps provide a financial boost to the economy.

According to a study published by the International Data Corporation it was found that e-waste recycling provided work for 30,000 full-time employees while contributing over five billion dollars to the U.S. economy since 2002.

The number of e-waste items in the U.S. will only grow larger as more and newer devices come onto the market. It's estimated that as of 2015 Americans have been replacing their cell phones every 22 months on average, and upgrading our personal computers every two years.

If you add up all the devices that get disposed of at that rate, the e-waste alone we throw out annually could fill up to 60 landfills.

In addition to helping the planet and minimizing the use of landfills, massive amounts of materials and resources can be saved by recovering and reusing those available in e-waste products.

Statistics from the EPA help to illustrate the vast amount of reclaimed raw materials that can be  extracted from e-waste:

There are massive economic and environmental benefits to recycling e-waste. However, there is still much to achieve towards becoming fully efficient with e-waste recycling. Currently, only around 12 to 20 percent of e-waste is recycled, according to the EPA and other sources. But the potential is there for recycling and reclaiming vast amounts of valuable materials and resources found in e-waste materials.

Professional Junk Removal is a Great Option for E-Waste

Ready to remove those old electronics? It’s as simple as 1, 2, 3. You simply make an appointment by booking online above or by calling 1.888.888.JUNK (5865).
Our professional and insured e-waste removal team will show up at your home or office; we call 15 minutes before we arrive on site and we’ll give you a free estimate based on how much room your junk takes up in our truck. You point and we haul those items into our junk removal trucks, with no hidden fees.