You got your first beautiful, new, big screen TV last year at Christmas. Congratulations! But what about your old TV?

If you still have your old television tucked in a back bedroom or out in the garage, you're not alone. It's been estimated that there have been 704.9 million cathode ray tube (CRT) televisions sold just in the U.S. since 1980, according to the EPA.

And, it's also estimated that there have been over 20 million of these TV sets being disposed of every year - and that number gets larger each year, as well.

All the more reason why it's definitely better to donate old TV sets than to try to toss them in the trash. But many people may wonder how hard that might be since their old TVs are, well... old?

The following suggestions were offered in a post at PocketsSense:

There are often more unique places for your old TV donation. Lee Neikirk, editor at Reviewed, had these suggestions:

If you've got old TVs sitting around that still work, consider donating them instead. Try calling up your local Goodwill, Salvation Army, or even a school or public library, and see if they're in need of a TV. We've donated 65-inch 4K HDR TVs to the Goodwill around the corner, so I know it can be done. Try just Googling "donate electronics."

You might also consider calling your local hobby shop or video game store—some older games are still played exclusively on CRTs, and the gamers are always looking for working sets.

Donating is almost always a better choice than simply throwing out a working TV set, no matter how old it is. Up to a point, that is.

Really old sets, like pre-1980, may not even be usable for most people. Those are probably the sets that you should consider recycling instead. But, that being said, donating can be better than disposing.

Techwalla offers some steps to efficiently donating your old TV set that has a tube in it:

Step 1
Find a charity organization that will accept a donated television. Many thrift stores, such as Goodwill or the Salvation Army, accept older-model televisions still in working condition. Some technical colleges will accept both working and non-working sets to use as parts for students in training. Call a public school in your area and ask if an older tube television would be beneficial to class instruction. You can also contact your county recycling department for referrals to places that accept donated televisions. Some recycling departments will also accept televisions for disposal on certain days of the year.

Step 2
Arrange a time to drop the television off or have it picked up. Depending on how large your television is, the place accepting the television will need time to make space for the set or plan for workers to lift and move it.

Step 3
Ask for a donation receipt once the television has been donated. Anytime you make a donation to a charity, school, or other non-profit organization, you are entitled to deduct that donation on your taxes. Most non-profits and public organizations will be happy to provide a receipt upon request.

What To Do With An Unwanted Old TV

Unfortunately, there may be a situation where your old TV is either too big (think 1970s rear projection monsters!) or too old (black and white with no inputs or outputs). So, what do you do with those dinosaurs?

Well, you won't be taking them to the county or city dump! At least not in half the states in the U.S. anyway.

According to the National Conference of State Legislatures (NCSL) website:

These means that at least half the states only allow for legally sanctioned disposal methods for old TVs and other electronic waste items, known as e-waste. 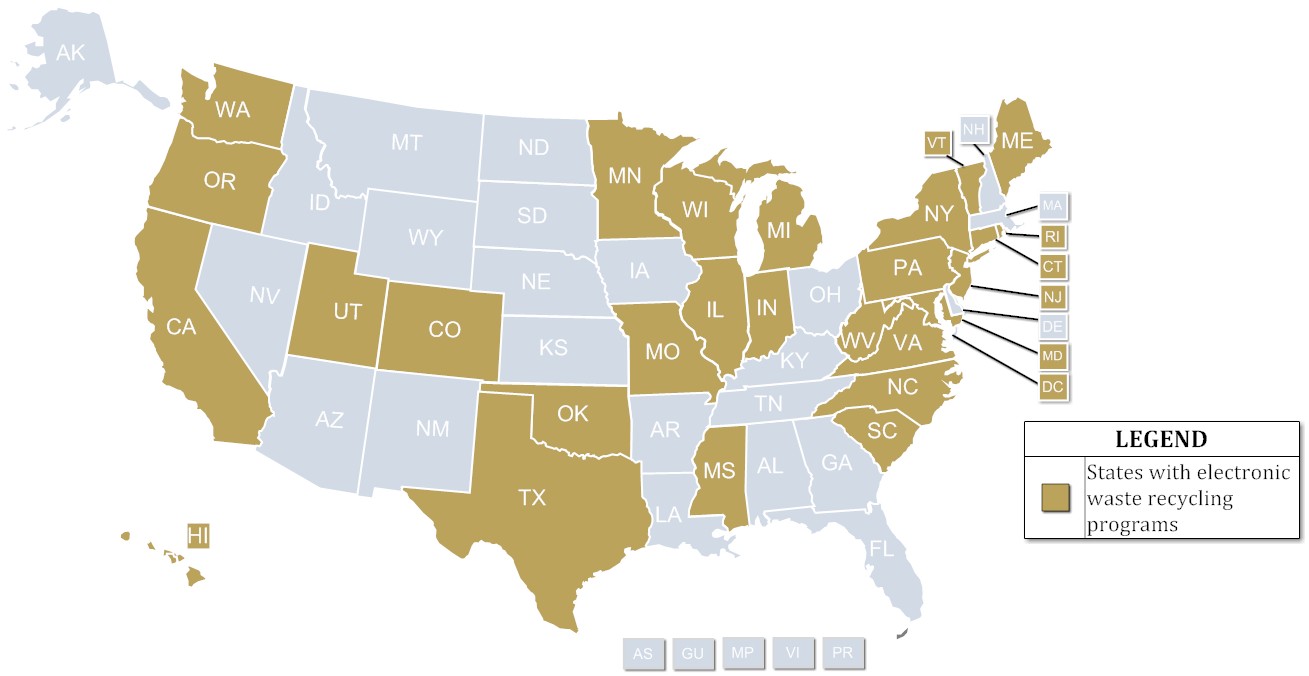 Of course, if you don't live in California or one the other 24 states you might be able to take your old TV set to your local landfill or county dump. But it's probably not a great idea environmentally speaking.

Those nasty, old CRT devices - cathode ray tubes - are made of primarily toxic materials. According to an article at Wikipedia,

"Older color and monochrome CRTs may have been manufactured with toxic substances, such as cadmium, in the phosphors. The rear glass tube of modern CRTs may be made from leaded glass, which represent an environmental hazard if disposed of improperly."

For this and other environmental reasons, it's always a better option to give away your old TV if at all possible. Short of that, try to find a recycling service that will take the old TVs. It may cost you a bit for fees, but at least you know the device will be properly disposed of. You never want to just dump your old television someplace. Not only is it most likely illegal, it is a hazard to others.

Newer TVs Can Be Donated, Too!

With the ongoing evolution of newer and bigger televisions, you may find that you need to get rid of an "old" flat screen unit. These monsters offer their own hazard for disposal.  That's because one of the problems with getting rid of that old "newer" television is the sheer bulk and size of the units. Just removing it and transporting it can be hazardous. Plus you have to get it into a vehicle!

Flat screen TVs don't contain all of the toxic substances of CRTs, but they still have some toxins, primarily mercury. The fact is that, even if you have a flat screen set,  you should donate old TV sets no matter what type or size.

And, if your old flat screen set doesn't work any more, recycling is still the best option for getting rid of it. The most efficient and convenient way to take care of your old TV disposal needs is to call a reputable junk hauling firm like Junk King. And this can include old computer monitors, old CRT televisions, and large, flat screen units.

Junk King provides an efficient, safe and eco-friendly TV disposal service to make the whole process easy for you. Our experienced television removal team will haul off that old TV set without damaging your home on the way out. We’ll do all the heavy lifting - no need to carry items out to the curb. Finally, we’ll make sure that the TV is disposed of at a proper recycling facility so that it doesn’t do any harm to our ecosystem.

It’s as simple as 1, 2, 3. You make an appointment by booking online above or by calling 1.888.888.JUNK (5865). Our professional and insured TV disposal team will show up at your home or office and we will call you 15 minutes before we arrive on site. We will always give you a free estimate based on how much room your items take up in our truck. You simply point and we'll haul your old TV set into our junk removal trucks, with no hidden fees.