What You Need To Know About Computer Monitor Recycling 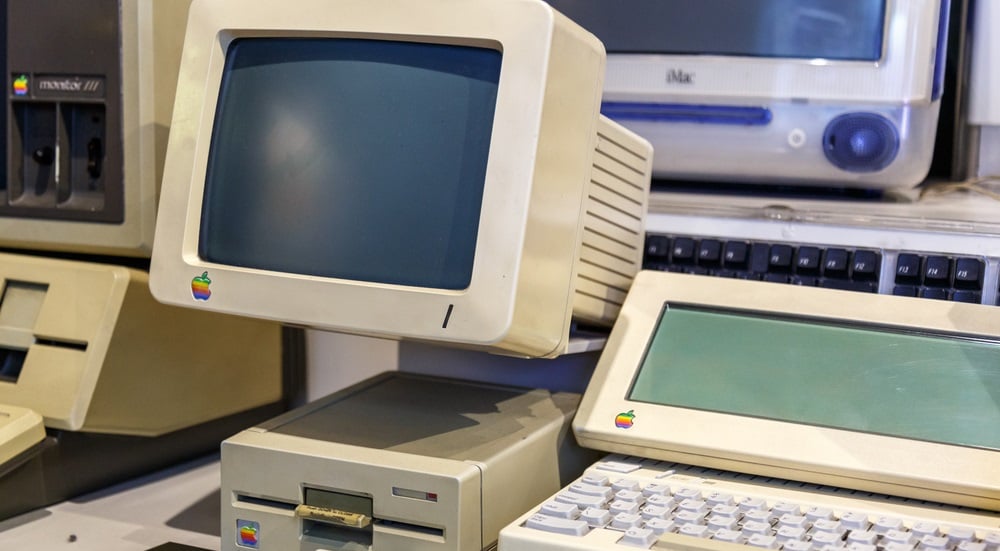 [This article was originally published in July 2019. It has since been expanded, updated, and revised.]

If you've recently relocated your offices, or you've finally decided to clear out your garage or storage shed, you may need computer monitor recycling.

That's because it's quite likely that you have a few old computers stashed in their somewhere. In fact, it's possible that if you're moving your place of business, you may have stacks of old monitors, PCs, and various other types of outdated and unusable electronics. So, what do you do with them?

Okay, so no one would really think to get rid of their old, monster-sized monitors that way, right?

And in some states it's not even legal to dispose of much of your old computer equipment and other types of e-waste, or electronic waste, in the household garbage. Or work dumpster either, just so you know.

That includes your old batteries, too, by the way. And those old computer monitors are actually toxic. That's right - they can contain up to eight pounds of lead in their glass tubes. Not to mention that the inside of the tubes were coated with toxic phosphorous dust.

So, if you can't throw them in your residential trash bin or your company's trash dumpster behind the warehouse, what can you do with them?

Fortunately, you do have a few options.

You can possibly re-use it for some dedicated purpose unless it no longer works, of course, And if it does work, you might still be able to sell it online or donate your monitor. However, if it is really old (think pre-2005), you can dispose of it in a qualifying e-waste recycling program.

Many recycling programs have been established across North America, and they're dedicated to making sure used monitors aren't tossed in landfills to rot. And, some states like California, require that these devices and equipment be properly disposed of for recycling.

However, there are some things you should know about what your monitors contain, how they can hurt the environment, and how to find a reliable recycling service. Not all recycling programs are trustworthy, and it's up to you to find one to whom you can confidently hand over your monitor.

Similar to CRT televisions, CRT monitors use the same core concept and technology. While they performed well for the time, almost everyone has switched to LCD over the years. In fact, it is now almost impossible to find and purchase a new CRT device.

And this transition has lead to a massive stockpile of now unwanted CRT monitors and televisions.

Disposing of them is not simple, however, as the chemicals and components within CRT monitors are hazardous, even toxic, and must be handled and disposed of properly.

If left in a landfill, for example, these monitors slowly degrade, allowing toxic chemicals and heavy metals to enter the soil. From there, they can find their way back into the human ecosystem through plants and animals.

And, if mishandled, these heavy metals can harm those tasked with dismantling and recycling them.

The most notable metal contained in CRT monitors is lead but they also contain cadmium, which is highly toxic, and small amounts of arsenic. Flame retardants used in the construction of many electronics are also highly toxic when disposed of improperly.

LCD monitors have largely replaced CRT in most homes as those dinosaurs went out of production as far back as 2007. But that doesn't mean the LCD units aren't detrimental to the environment when illegally dumped or thrown away in a landfill.

LCD monitors, or liquid crystal display monitors, use crystals that change color according to an electrical charge.

While LCD monitors are inherently stable and not a health hazard while being used, once they are disposed of they possess the potential for releasing hazardous material.

According to one article about a research project on LCD monitors,

The international research team analyzed 362 chemicals used in LCD screens and found that nearly 100 have the potential to be toxic. These particles don't break down quickly and have "high mobility" in the environment.

In addition, recent research has suggested that liquid crystal monomers - the synthetic chemicals that make LCDs work - contain a variety of toxic chemicals, which tests have shown can leach into the atmosphere.

While computer monitor recycling is the optimum disposal solution, not all monitors need to be recycled.

Before you toss out your old monitor, you can always try to pass it along to someone else or re-purpose it for other purposes like a retro-home security monitoring station. Many programs have been established to provide used electronics to low-income families. And various online sites such as Facebook Marketplace and Craigslist exist to help people sell their old items.

If you have the tech knowledge, you can also revitalize old monitors for a new cause. If you have the time and patience, there are many ways you can try to extend the usable life of your monitor, as well as the potential to recoup some of its cost.

Repurposing is a popular movement - even with electronics - and more and more people are posting guides and ideas online.

A search for "CRT monitor repurposing" can bring up hundreds of tutorials and photos of people's creative refurbishing projects. While this hobby can be dangerous if done improperly, it can also be rewarding.

Many LCD monitors can also be re-used as televisions, digital displays, and even digital photo frames.

As long as a device still works, it still has value to someone. If you don't mind holding onto it for a little while longer, try listing it online. No matter how old it is, someone might have an interest in paying you for it. Just make sure to attach a photo of it operating, or people might be suspicious.

You can also try donating it. Schools, libraries, and thrift stores are excellent places to ask.

If your monitor is broken, obsolete, or otherwise useless, however, you will be better off recycling it. This isn't always an easy process, unfortunately, causing many people to hold onto their old CRT monitors because they aren't sure what to do with them.

And they're heavy and cumbersome.

However, you have probably long ago made the switch to LCD and the good news is that there are many recycling programs accept your old LCD monitors, as well as you ancient CRT,  for a small fee.

The problem for recyclers is that CRT recycling is an expensive process that is not highly profitable. So, for that reason, many recycling programs must charge a fee to accept CRT monitors and televisions.

Keep in mind, too, that CRT technology was developed long before environmental concerns were a priority in our society, so they aren't the most recycle-friendly devices.

However, most people are happy to pay a small fee to get these clunky relics out of their homes. Dumping them is illegal in many places, and curbside garbage programs are instructed not to pick them up. That leaves people with one option: bite the bullet and pay the fee.

A word of caution here: while many recycling programs do take these electronics off your hands, that doesn't mean they're doing the right thing with them. Some companies make their money by exporting CRT and LCD monitors to developing countries, where they are picked apart, burned, or left to rot.

What you want is a reliable, genuinely "green" and local computer monitor recycling service that will pick up your old gear for you. The good news is that there is such a service!

Once you've decided to recycle your old monitors and related computer hardware, you want to make sure you do so through a reliably "green" source.

While you could search online for environmentally-friendly recycling program that specializes in computer monitors, hardware, and other e-waste, we have a much easier solution. Just call the pros at Junk King!

The good news is that a junk recycling service like Junk King offers far more than just genuinely green recycling processes for old computer monitors. In fact, at Junk King, we take much, much more than just monitors and other types of e-waste; we also accept things like broken-down appliances and old furniture and even used mattresses.

If you have junk piled up in your home or is storage rental unit, we'll remove it for you.

We take just about anything and everything except for hazardous waste. And after we pick it up and haul it away for you, your junk is sorted through, organized, and recycled, if possible. In fact, we succeed in getting up to 60 percent of everything we collect a new life elsewhere.

If you're ready to schedule a pick-up, we’ll give you a free price estimate and a courtesy call about 15 to 30 minutes before we arrive to let you know when we’re coming. It's junk removal made easy.