Choosing a company to trust with your local electronics recycling can have a more significant impact on the environment than you might think. Whether you stay up to date with the news or not, you might have heard about the "wave" of e-waste piling up all over the world. Technology has experienced a massive boom, and this has resulted in quite a few discarded electronics. Many older devices have become obsolete over time, and consumer culture has led people to upgrade their phones and computers every few years.

However, this e-waste doesn't just decompose like fruit or cardboard. It stays in our ecosystem for a long time, wreaking havoc on wildlife and, in many unfortunate cases, on the people tasked with recycling it. Human, animal, and plant populations are all affected, along with our soil and water. The state of e-waste is dire, and it’s only getting worse.

Responsible e-cycling is the only thing we can do to reduce this damage. If you're curious about the effects of e-waste on various populations, this article will expand on the impact that your old televisions, computers, and smartphones can have on the environment when they're carelessly tossed away. Many of these effects are avoidable; it just requires some effort.

Where Your E-Waste Goes 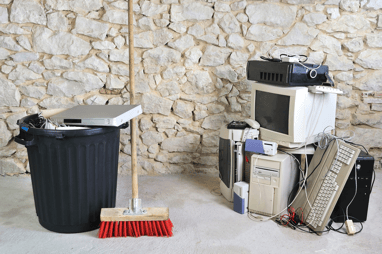 When you throw out your electronics, they end up in one of two places. In a landfill, or overseas. If it stays in North America, there's a chance that it will end up in one of our local landfills. Here, it will waste away, slowly releasing toxic metals into the soil.

While there are laws and legislation to prevent televisions, monitors, and lithium batteries from being thrown away, many people don't heed these warnings. They leave monitors or televisions in dumpsters and throw away entire phones and tablets. Electronics should never be thrown away with your household trash. These devices last longer than organic matter and plastic combined, and are far more toxic to the environment.

However, using any old recycling service you can find still doesn't guarantee that your electronics won't end up exported or thrown away. Some recycling services offer "green" or "sustainable" recycling, only to sell off individual parts or devices. Excess e-waste may then be sold to buyers overseas.

While these faux-green recyclers may take your e-waste off your hands, they haven’t done you any real favors. E-waste processing has a negative impact on the people in developing nations when they are tasked with dismantling and sorting these devices in unsafe conditions. Improper disposal further compounds the damage done, as toxic materials make their way into the soil and groundwater.

Across India, China, Pakistan, and other countries, there is a health crisis regarding e-waste. The toxic metals within many electronics have to be mined, and many low-wage workers are paid a low wage to take on this work without appropriate protective or safety gear. However, it is their only source of income, so they expose themselves to the harmful effects regardless of the risks.

Many electronic devices are not designed to be cracked open or recycled, making it difficult to recycle them safely. Some processing centers will burn or break open the devices to get around this limitation, which releases debris and smoke containing harmful particles into the air and soil.

From there, the heavy metals and toxic substances begin affecting the surrounding populations. Children are particularly susceptible to this. Because they are still growing, they intake more toxins according to their body weight. While adults might experience symptoms of toxicity, children can become sick and develop chronic illnesses.

Children are not only exposed to e-waste through air and water alone. Many of their schools and playgrounds are located near dumping or recycling sites, and some of them even work with the e-waste themselves. Mothers in recycling towns experience higher rates of miscarriage, along with premature and stillborn births.

On top of the effects on human populations, many of these areas experience severe environmental decline as well.

Effects on the Environment

As toxic metals are burned, discarded, and left to degrade, they make their way into the soil and groundwater, which harms plant life and reduces the numbers of bacteria and worms in the soil. Metals and chemicals can also be introduced through crops. When humans or animals eat food grown in toxic soil, the food itself can be dangerous to eat.

Water can carry heavy metals to new locations, dumping them into streams, rivers, or the ocean. There, they can build up and kill fish and other aquatic life. If this water is used for drinking by animals or humans, the toxins can build up in their systems.

Despite the risks, many recycling processes involve methods that release toxins and carcinogens into the air and soil. Open burning, chemical stripping, and acid baths are all popular methods used to extract the valuable parts. Lower value materials may then be dumped; like plastics and other metals, e-waste has the ability can linger in landfills for centuries.

How To Stem The Tide

Holding back the tsunami of e-waste isn't something you can do alone, but your actions can still make an impact. Along with recycling, you can also practice other methods of environmental mindfulness. Every laptop, monitor, television, and smartphone that is pulled from a shipping pallet or landfill is one device that won't go on to harm humans or wildlife populations.

Think about how many devices you have bought and used over the years. Combine that with the number of electronics your family and friends have used, and it adds up to a significant sum. If you responsibly recycle your electronics, you're encouraging others to do the same and giving your support to services that provide ethical recycling.

Junk King is one of those services--up to 60% of the waste we haul goes on to be donated or recycled.  And we offer more than just e-cycling. Whether you have old furniture, appliances, e-waste, or a little bit of everything that needs to be disposed of responsibly, we can handle it all.