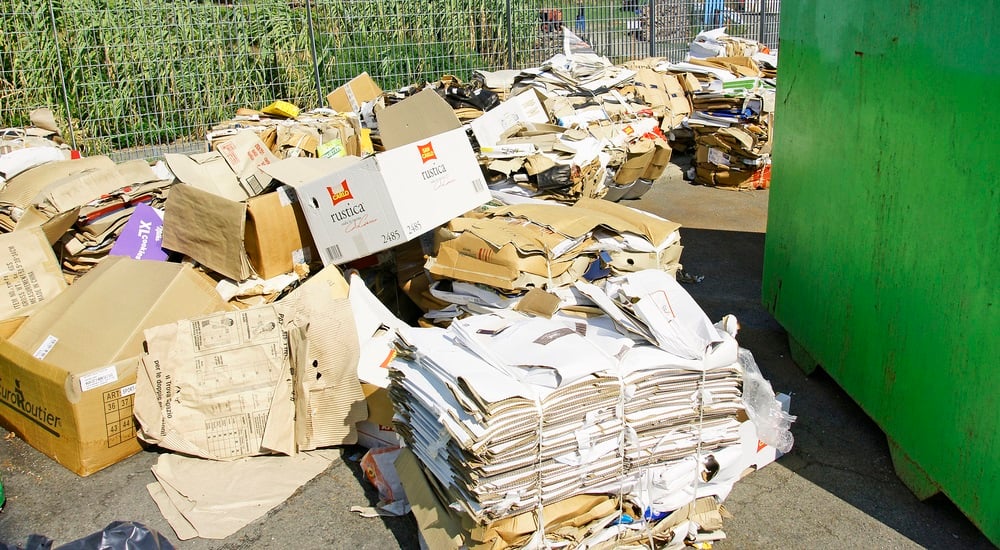 Recycling paper is a decades-old practice in this country. But it has fallen on hard times lately.

Part of the problem is that the United States is finding that all the millions of tons of waste paper we produce every year, Thanks in large part to a decision by China.

China, as a sovereign nation with reasonable economic concerns, instituted its “National Sword” policy in January 2018. This policy has banned the import of nearly half of the world’s plastics and other materials that had previously been shipped to China's recycling processors for the past quarter century.

And this includes what is known as "mixed paper."

What About Old Newspapers - and Other Paper Waste?

In addition to aluminum cans, various plastics, and cardboard, we also work very hard to recycle all the waste paper items like newspaper, junk mail, office paper, wrappers, and so on.

A simple definition is provided by Stanford University,

"Mixed paper is our catch-all category for paper. If the paper tears and is not contaminated with food or oil, it can be placed in the paper recycling bin."

But note that this the paper items must not be "contaminated with food or oil." What does that mean exactly? Think pizza boxes and soiled wrappers from junk food cartons. And herein lies the problem for U.S. recyclers: as a nation we are still primarily dependent on single stream recycling processes.

Single stream recycling is a system in which all paper fibers, plastics, metals, and other containers are mixed in a collection truck, instead of being sorted by the depositor into separate types of recyclable materials.

And this creates costly and inefficiency issues.

As The Atlantic magazine noted,

"As the trash piles up, American cities are scrambling to figure out what to do with everything they had previously sent to China. But few businesses want it domestically, for one very big reason: Despite all those advertising campaigns, Americans are terrible at recycling.

About 25 percent of what ends up in the blue bins is contaminated, according to the National Waste & Recycling Association. For decades, we’ve been throwing just about whatever we wanted—wire hangers and pizza boxes and ketchup bottles and yogurt containers—into the bin and sending it to China, where low-paid workers sorted through it and cleaned it up. That’s no longer an option. And in the United States, at least, it rarely makes sense to employ people to sort through our recycling so that it can be made into new material, because virgin plastics and paper are still cheaper in comparison."

As a result, we have seen far more mixed paper waste being dumped into landfills or incinerated in “waste-to-energy” (WTE) plants.

The Problems With Paper

Incineration presumes to convert burned waste materials into new sources of energy, which is touted as a far superior option to landfills. However, the energy generated by incineration compared to the energy conserved by recycling these materials is nominal.

On the plus side, we are still doing relatively well in recycling usable waste paper.

"The American Forest & Paper Association (AF&PA), Washington, has announced that 66.2 percent of paper consumed in the U.S. was recovered for recycling in 2019. The recycling rate for old corrugated containers (OCC) was 92 percent in 2019, and the three-year average OCC recycling rate has been 92.3 percent, AF&PA reports in a news release."

Generally speaking, then, we can assume that at least 22 million tons of waste paper either ends up in our landfills, or is being incinerated.

Paper and paperboard products made up the largest percentage of all the materials in municipal waste stream, at 25 percent of total generation, according to the EPA.

In an article at Waste Dive, Dylan de Thomas, vice president of industry collaboration at The Recycling Partnership, pointed out,

"[D]espite the disruptions from China's policy changes, paper recycling is still going strong. Mixed paper may currently be the most challenging part of the recycling stream, but in terms of economics, mills across the country are still taking as much as they can."

This is good news for the paper recycling industry and for the environment. Landfills are still on the decline and incinerating isn't the best option either.

Essentially, this approach keeps the fiber component, i.e. paper and cardboard,  separate from waste containers, including glass and plastic containers and cans.

There are differing schools of thought on this currently, but European nations have significantly higher recycling rates than the U.S. by utilizing a dual stream process.

A Few Tips for Recycling Paper

While proper recycling is not difficult, it's not quite as simple as tossing it in the "blue bin." Here are few tips to guide you with recycling your waste paper products effectively (Thanks to earth911 and RecycleNow) :

Got Junk? We Can Make Your Junk Disposal and Recycling Easy

There is a truly simple and efficient option and that's calling Junk King.

Junk King provides professional junk hauling services to remove any and all of your junk. And this includes anything made with plastic and even your excess trash and garbage. We even have the equipment and man power to remove a large fridge and other appliances up a small stairway or down your basement steps out through the garage.

Whatever your junk consists of, Junk King can help you get it out of the way. We provide an eco-friendly junk removal service to help you get rid of any unwanted junk, large trash items, or any old appliances.

Our professional and insured appliance disposal team will show up at your home or office; we call 15 minutes before we arrive on site and we’ll give you a free estimate based on how much room your junk takes up in our truck. You point and we haul your unwanted items into our junk removal trucks, with no hidden fees.