Old Mobile Phone Disposal And The Challenge Of E-Waste 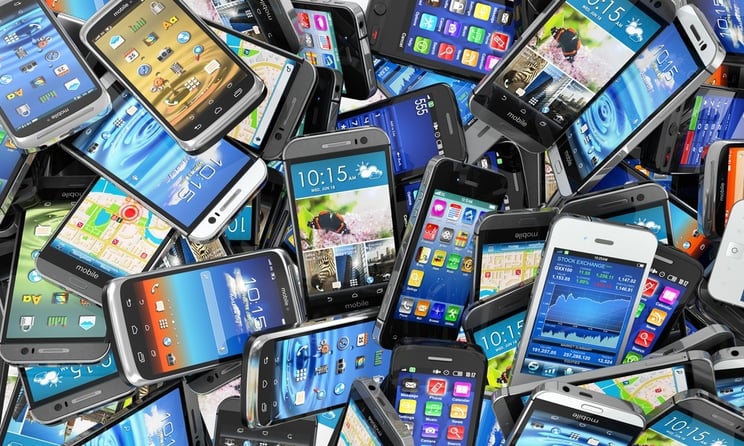 [Editors note: This post was originally published in March 2017 and has been revamped and updated for accuracy and comprehensiveness.]

The U.S. is awash in old electronics and old mobile phones are among the top items in this growing pile of electronic waste. But there are noble alternatives to simply tossing them in the trash!

We live in a wonderful time of incredible technology and a vast array of high-tech devices to enhance our lives. With all of this technology and devices, however, comes the problem of efficient disposal.

Can You Hear Me Now? Old Phones as E-Waste

There are a few issues to consider with electronic waste, or e-waste, disposal. Because of the number of laws and regulations, especially in states such as California, many items such as monitors, TVs, and even cell phones cannot be simply tossed in the trash.

To get a sense of how much e-waste are we talking about, consider just smartphones.

According to preliminary results from the International Data Corporation (IDC) Worldwide Quarterly Mobile Phone Tracker, vendors shipped a total of 343.3 million smartphones worldwide in the second quarter of 2016. And that was just the middle of the year. The same source predicts that the worldwide smartphone market would reach a total of 1.46 billion units being shipped in 2016.

Maybe you’ve still got your old cell phone after getting a new one for Christmas, or you’re ready to upgrade now. The question now is what to do with your old phone? If your carrier doesn’t ask to have it back, you have a few options.

You could hold to it and keep it as a back-up phone. You could give it one of the kids or someone else in your family. And you could even give it to a friend or someone you know who might not be able to afford one themselves.

Aside from either keeping it for yourself or giving it to someone you know, you still have two other options:

Finding a New Home for Your Phone

Believe it or not, there is a huge market for used phones.  And not just “newer” models, either. You can sell or trade in older models, and even cracked or broken phones. Used phones and other electronics can still generate some money for you, or at least allow you to dispose of them responsibly with e-waste recycling.

According to an article at cnet.com, while you are not likely to net hundreds of dollars for you old cell phone, you can get some money if:

It is usually more likely that you will be able to get more money for you old phones by selling them directly to a buyer through sites like Craigslist or eBay. But if you’ve sold anything on those sites you know it can take time and effort. Having the original packaging, charger, cables and cords will greatly increase the likelihood of finding a good buyer.

There are a number of sites that will pay you for your old phone, as well. The big downside to this approach is that current prices change depending on the phone and its condition. In addition, not every phone buying service will take every phone. So you really do have do some research.

Most sites and services will only give you a gift card as opposed to cash. Best Buy and Apple will give you gift cards that can only be used at their stores, for example. While some do pay in cash, it may take some time to receive payment after you shipped off your old phone.

Donating Your Old Phones Can Do Good In Two Ways

There is any number of reasons to donate to good causes and worthy charities. But reducing e-waste going into landfills and helping someone in need are two ways donating phones can do good.

According to the EPA, a vast majority of the electronics that are disposed of every year still have substantial use in them if they are not simply thrown out. And even electronics and, in particular, cell phones that are recycled instead of lost in landfills can bring huge benefits.

If you would rather donate your old phones instead of trying to get some money for them, here a few great causes you could consider:

Help Out Your Local Charities

AmericaCellPhoneDrive.org will help you do your community and the environment a favor, and legally comply with EPA regulations on disposal of toxic items such as batteries, by joining tens of thousands of individuals and over 5,000 local and national charitable organizations in recycling old, unused cell phones.

This is an organization devoted to the socially responsible reuse of retired cellular telephones and cell phone components by raising funds for charitable organizations. These include groups that provide scholarships for American children who have lost a parent to enemy or terrorist acts, feed malnourished children in Asia, build low-income housing, donate prepaid calling cards to military personnel, sponsor missionaries in China and support a host of other good works.

Cell Phones for Soldiers is an organization that uses the profits from recycling donated phones to provide free calling cards to deployed U.S. soldiers so that they can connect with family back home. It's one of the most popular cell phone donation programs and has prevented over 11.6 million phones from going to landfills in the decade since it started.

In addition, Cell Phones For Soldiers has provided more than 300 million minutes of talk time to our troops serving around the world through the Minutes That Matter program, and we continue Helping Heroes Home via emergency funds that so far have assisted more than 3,100 veterans.

Working with a variety of charities, PhoneCharity helps groups like the American Red Cross, the National Wildlife Federation, Feed the Children and the AIDS Healthcare Foundation to raise funds through cell phone recycling. As a donor, you can choose from large organizations like these, or find a favorite local charity to support with your donations. There are several affiliated charities around the U.S., so check here to find a drop off spot near you.