What do you do with your old electronic devices that may be outdated but are still working? Here are some solutions.

Regardless of the style or age, if they're still working devices you probably are hesitant to just throw them in the trash. Surely someone, somewhere can still use these old dinosaurs, right?

All cell phones, regardless of the type, style or age are considered e-waste once they are ready 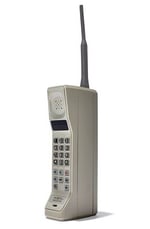 How old can they be and still be usable? Well, there is a practical limit. It's not likely you'll find a home for something like the Motorola DynaTAC 8000X.

This was the world's first commercial handheld cell phone and it became available to the public in March 1984. Weighing a hefty 1.75 pounds, it was often called "The Brick," and was sold for the paltry sum of $4,000. Oh, and the battery life was about 30 minutes.

From that point on, however, the size, weight and capacity of cell phones improved drastically and quickly. But if your old phone is more than five years old you can simply keep it for an emergency phone if you still want to hang on to it. The law requires that all cell phones have the capability of being used to dial 911 so they still have some practical use.

Older smartphones, those more than three or four years old, often begin to miss out on upgrades and quickly become dated compared to newer versions of the same brand.  The bottom line is that, while you may not want to keep your old phone for yourself, there is still use to be had from most any cell phone that is still in working order.

If and when you decide to dispose of your old cell phones, keep in mind that they are considered e-waste, or electronic waste, at that point and must be disposed of properly. However, if your old phones and other devices still work, or can be easily refurbished, there are a number of good options for them. In other words, not all e-waste has to be gotten rid of.

Options for E-Waste That Works

Although e-waste is comprised of all sorts of devices and components including household appliances and office equipment, it does seem that old phones are the most commonly "disposed" of devices by Americans.

According to one source,

"The average American has two spare phones lying around, but when these languish in people’s homes instead of being recycled, new metals must be extracted from the ground to make new products — a resource-intensive process that could be avoided if unwanted cell phones were simply recycled, say the authors of a study in the International Journal of Life Cycle Assessment. And if these old phones end up in the landfill, not only will their parts and value be wasted, but lead and other heavy metals they contain will be able to leach into our soil and groundwater."

And, according to the EPA, approximately 70 percent of the toxins that end up in landfills are from electronic waste. All the more reason to find better uses for working phones and other e-waste items.

Here's a short list of things you can use your old phone for if you want to hang on to it:

An Emergency Phone
We mentioned this one already, but even if you don't have an active mobile plan for your old phone you can still use it to call emergency services. Federal law requires all cell phones to be able to call 911, even without a service plan. Make sure it's always charged and keep it in a convenient location, like your car, purse or briefcase.

An Alarm Clock and App Device
Most cell phones come with a built-in alarm function that works even without cell service. In addition, you can still use it for many apps that you had already downloaded on your old device. It can make for a convenient calendar, calculator, and alarm clock among other things.

A Digital Entertainment Device
Because smartphone storage has expanded so much in recent years, newer models can have as much as 256GB. This is storage that can be used to hold thousands of songs, games and movies. Using your old phone as a dedicated entertainment device frees up your current phone and allows for uninterrupted viewing, playing or listening.

But what if you don't want to keep your old electronics? Not a problem - there are a few good options for disposing of your old, working electronics without sending them to the dump.

There is always a market for old stuff that still works. Some people will buy them simply because they can't afford new products, while others intentionally look for and collect older devices for a variety of reasons. There are a number of ways to sell your old "e-waste" devices including the more popular online sites like Craigslist and eBay.

Don't want to bother with listing your stuff and wading through responses? But you still want to find a good home for your gently-used electronic devices? Consider donating them.

The most sought after "e-waste" devices for donations is - can you guess? - cell phones. After that you would be correct to think that it's TVs. And both of these can be easily donated in several ways.

TVs can be donated to charity thrift stores and other non-profit organizations that take donations. Be sure that your old set still works and is preferably a color one. And, when it comes to TVs, don't overlook your local schools, daycare centers, senior centers and other organizations and facilities. Many of these could make great use of working televisions and even computer monitors.

Eliciting and facilitating the donations of old cell phones has become something of an industry and the competition for these unwanted devices is growing. Many charitable and other non-profit groups will gladly take your old phone and, if not reuse them, they will recycle them and use the funds generated for their mission.

And, finally, you can still see your e-waste items properly disposed of through recycling and reuse without having to go through the trouble of doing it all yourself.

Convenient Disposal for Your E-Waste Items

Our professional and insured e-waste removal team will show up at your home or office. We call 15 minutes before we arrive on site and we’ll give you a free estimate based on how much room your junk takes up in our truck.

You point and we haul those items into our junk removal trucks, with no hidden fees.