Disaster Cleanup: It's Hazardous Waste So Leave It To The Experts

Posted by Junk King on Oct 19, 2017 6:01:00 AM
The week of October 8, 2017 saw the unprecedented destruction of almost 7,000 structures, mostly homes. The massive cleanup will take months and mostly by experts. 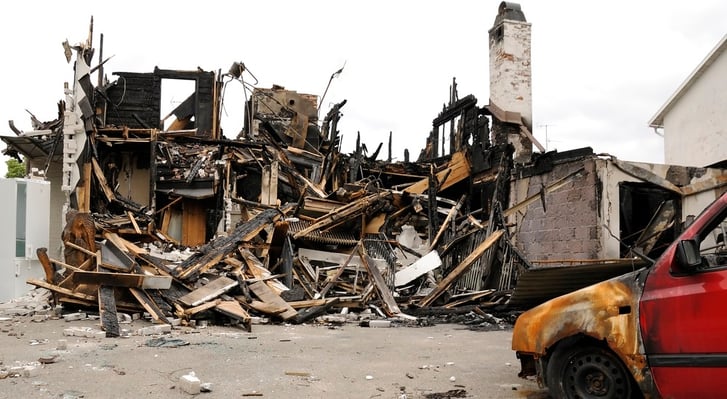 The temptation for many homeowners who lost their houses will be to go in and begin cleaning up and re-building. But this is not a job they will be allowed to do, unfortunately. Officials noted that both federal and state agencies are planning post-fire cleanup in the seven hardest hit Northern California counties.

These cleanup efforts will be long-term and likely to run into the hundreds of millions of dollars. However, for residential property owners, this will be done at no expense to them.

The U.S. Environmental Protection Agency (EPA) will be overseeing the first phase of cleanup, which involves removal of hazardous wast and toxic materials from the thousands of fire-scorched properties. The toxic materials include batteries, electronic waste, paint and solvents, flammable liquids, and materials that contain asbestos.

The EPA will also manage the second phase of cleanup, which is the removal of non-toxic waste and debris. This involves scraping away ash, concrete, metal and contaminated soil in all seven of the affected counties. According to government spokespersons, when the cleanup work is completed, homeowners will receive a certificate indicating their property has been properly cleaned and eligible for local building permits..

The state of California will bill insurance companies for cleanup costs, while homeowners will pay nothing even if uninsured.

Post-Fire Cleanup and Debris Removal is Not a DIY Task

According to officials, homeowners do have the option of hiring qualified private contractors to clear their land of the hazardous and toxic material. However, they warn against people attempting to do the cleanup themselves. Part of the problem is that sifting or shoveling ashes and debris that has settled causes them to become airborne again. This can then expose people to toxic materials, including carcinogens.

In addition, property owners attempting cleanup on their land run the risk of potential exclusion of their property from any government-funded cleanup program. Disposing of this material is complicated and restricted, as well. Burned material cannot be placed in trash cans or hauled to a local landfill.

According to a recent press release jointly issued by Cal Fire, Sonoma County and Santa Rosa, unauthorized removal of debris and ash, "may jeopardize the ability of property owners to obtain financial assistance from FEMA."

The dangers of cleanup are equally true for commercial properties, however, the costs for those cleanups will likely fall to the property owners.

In most situations the government does not pay for cleanup of commercial property. This policy is based on the assumption the owners have adequate insurance. However, if the debris on commercial sites are deemed to pose a threat to public health or the environment, it can often be removed at government expense.

The bottom line is that individual property owners will not be allowed to conduct any significant cleanup on their own, and finding an approved and certified contractor can be difficult as well as costly. In light of the dangers and difficulties involved, it is best to leave the cleanup to the experts.

If you live in Sonoma County or one of the neighboring counties impacted by the recent wildfires you can obtain up to date information here.